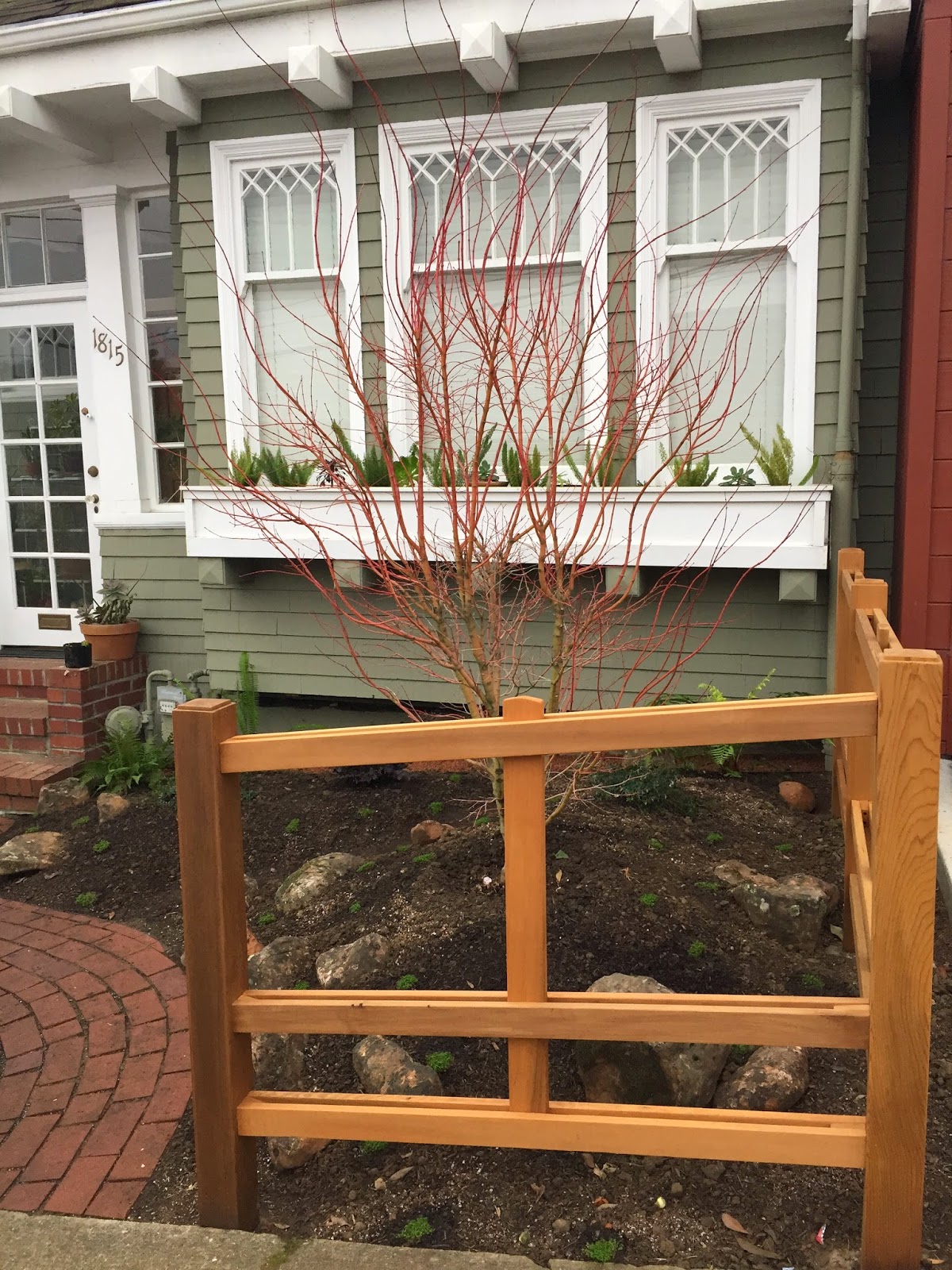 Recently, customers from San Francisco asked how much water they need to give their new Winter Flame Japanese Maple.

In the picture, the Winter Flame may not look like it came from a 25gallon container and is 6' tall.  However it is!  The new owners followed Wildwood Nursery instructions to a T when they planted it.  The tree is mounded up high and rocks around the base hold the soil in place - functional and aesthetically pleasing.

The first step is to fill a 5 gallon bucket about half way and see if the roots quickly absorb the water.  They should.  The next step would be to adjust a [rainbird] micro bubbler  so that it sprays to the edge of root ball.  Then, determine how long the micro bubbler takes to fill a bucket halfway.  Run the micro bubbler every two or three days.

Most importantly keep an eye on the plant if weather changes abruptly!
Posted by Joseph Monte at 7:46 PM No comments:

Genie On A Branch 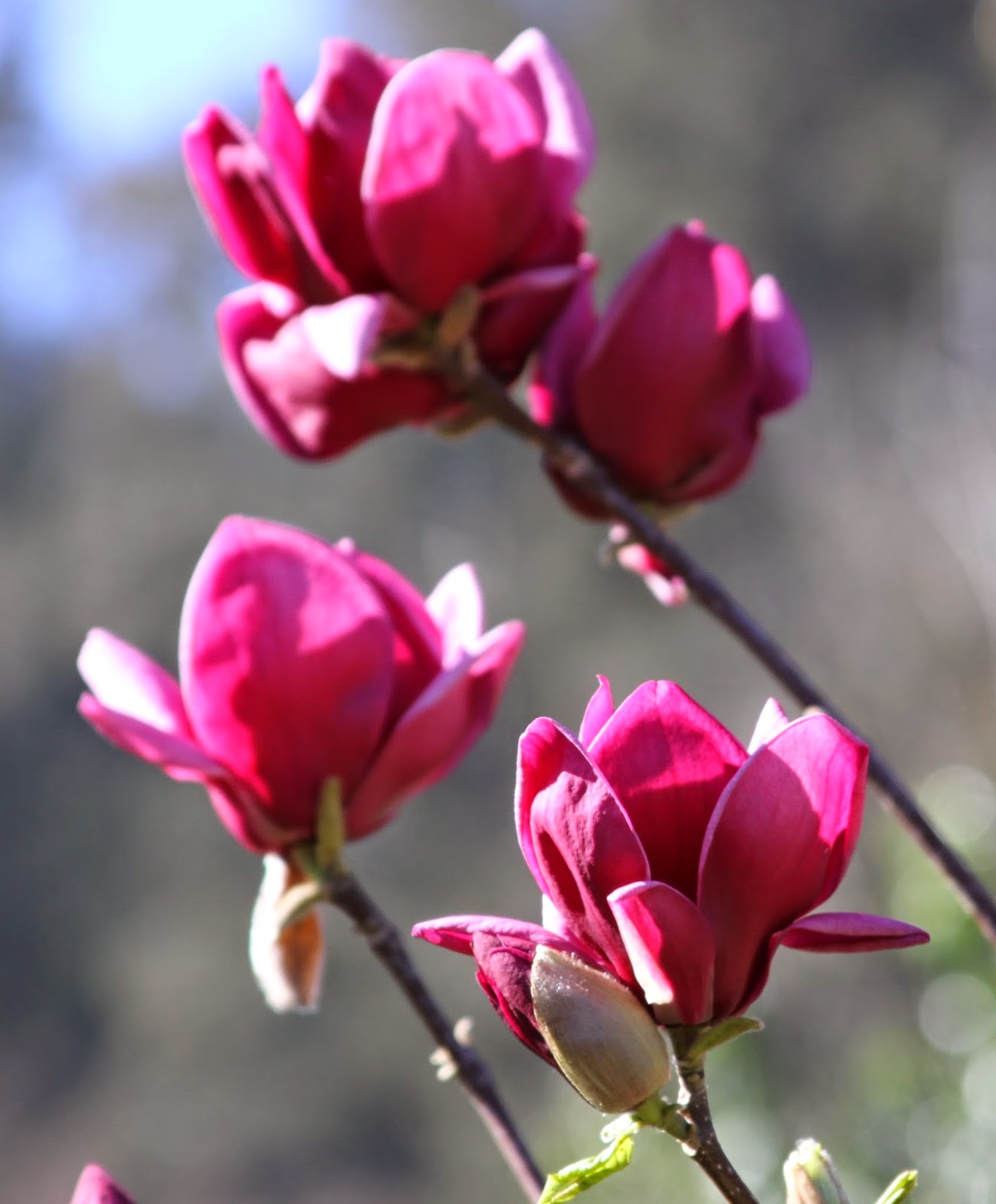 Most of the flowering trees at Wildwood Nursery are dogwoods.

One of the exceptions is the dwarf Magnolia x Genie.  This magnolia makes people stop and stare.  Many magnolia blossoms start a deep purple.  When they open, the blossoms have a heavy white blush.  Genie holds the deep magenta purple.  With sunlight shining through the petals, this tree glows.

Genie is now on our website.  We have many three foot tall Genies available and one large tree this spring.  Call 707.833.1161 to order the six foot tree.

To see more magnolias in bloom visit Quarryhill and San Francisco Botanic Garden.
Posted by Joseph Monte at 10:35 AM No comments:

Email ThisBlogThis!Share to TwitterShare to FacebookShare to Pinterest
Labels: Magnolias 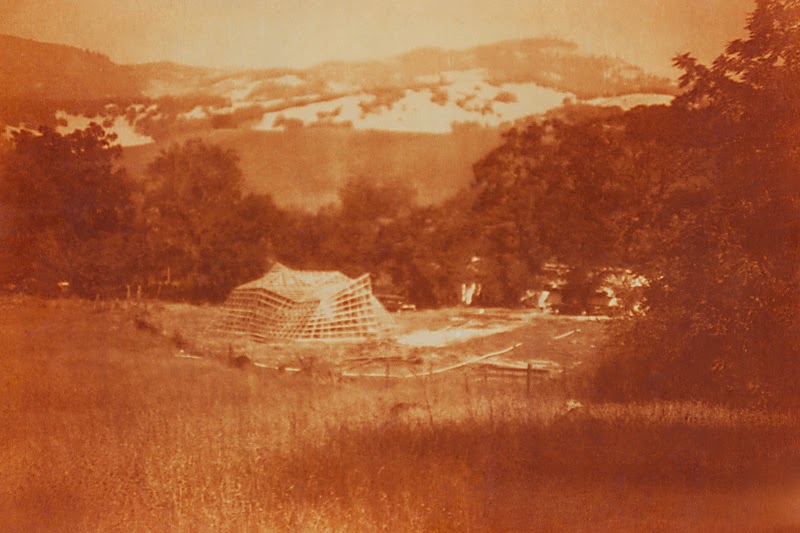 Last night, the big SNL anniversary party was in New York.  Slightly farther from the spotlight, Wildwood also celebrates its 40th anniversary in 2015.

In 1975, Wildwood was a small dot on the map.  Now, the dot that counts is placement on google maps.  An online presence is not enough; mobile commerce is expected.  If you said Shopify in the 70's, people would have said 'shopifly??'.

In the beginning, Wildwood sold natives.  We still do, they're just native to other continents.  Wildwood sells plants that deserve a place in the landscape.  The California lifestyle is about extending boundaries, blurring boundaries, and being outdoors.   That's what we try to live at Wildwood.

Wildwood plants add feeling to a place.  Maybe that's why we ship plants nationwide; some are not far from Studio 8H.
Posted by Joseph Monte at 4:06 PM No comments:

Email ThisBlogThis!Share to TwitterShare to FacebookShare to Pinterest
Labels: Parties

In The Event Of Rain 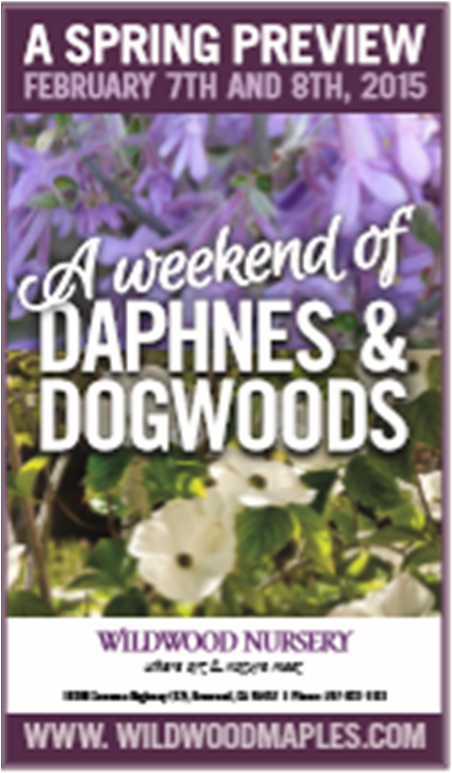 There will be no rain delay for Dogwoods & Daphnes at Wildwood.

We prepared the plants for what to do in the event of rain.  Everything will operate as normal at Wildwood.  The rain will not interrupt the normal watering schedule for the plants.  They are on a winter schedule which simulates rain.

Visitors can expect healthy plants that are ready to be transplanted.  We will explain how to continue the winter schedule and make adjustments for spring and summer.

Daphnes and Dogwoods will not break your watering budget this year.  They require regular watering which is easy to establish.  The rewards are worth the water.
Posted by Joseph Monte at 9:42 AM No comments: 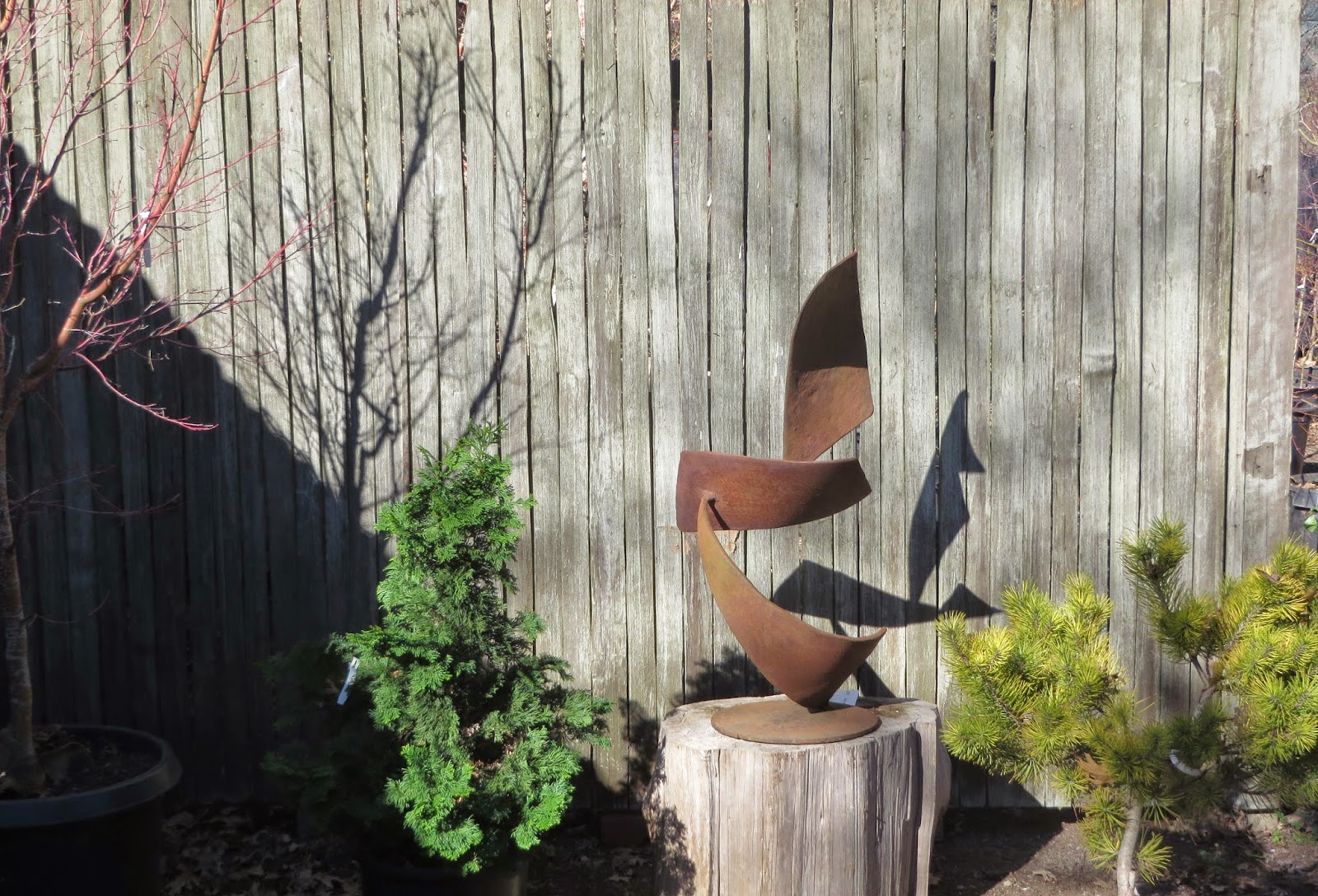 Wildwood salvaged several sections of grapestake fence from a home remodel for 'new' displays in the nursery.

The weathered pickets have a very versatile look.  They would fit in a coastal setting, in an English manor, and in an Asian garden.  Of course, they look great in a California garden!

Even with bare branches, plant silhouettes look very mysterious against the wood.  So far there are two displays ready, more will appear shortly!
Posted by Joseph Monte at 9:22 PM No comments: 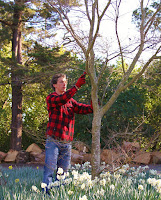